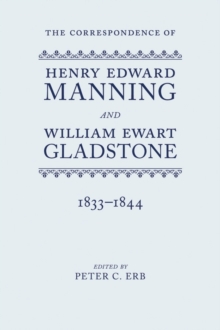 The Correspondence of Henry Edward Manning and William Ewart Gladstone : Volume One 1833-1844 Hardback

Tracing as it does the shifting relationships between two such major figures over the greater part of the nineteenth century, the collection provides substantial insights into debates on Church-State realignments in the 1830s and 1840s, the entanglements of Anglican Old High Churchmenand Tractarians from the early years of the Oxford Movement to 1851, and the relationships between Roman Catholics and the British Government over Italian, Irish, educational, and other political and religious issues in the latter half of the nineteenth century.

The first and second volumes include the greater part of the correspondence, composed while the two men were close friends, prior to Manning's entrance into the Roman Catholic Church in April 1851 and Gladstone's shift from the Conservative to the Liberal party at approximately the same time.

The third and fourth volumes of the edition comprise their letters from the post-1861 period, Manning then serving as a Roman Catholic priest and Archbishop of Westminster, and Gladstone as Chancellor ofthe Exchequer, leader of the Liberal opposition, and three terms as Liberal Prime Minister (his fourth following Manning's death).

The fourth volume includes an appendix of materials marking their public debate initiated in late 1874 by Gladstone's charge that with the formal declaration of papalinfallibility in 1870 Roman Catholics were required to renounce their 'moral and mental freedom.'