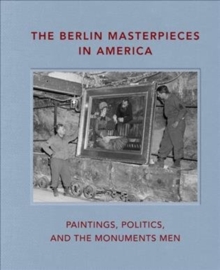 The Berlin Masterpieces in America : Paintings, Politics and the Monuments Men Hardback

This new volume tells the story of some of the paintings rescued by the the Monuments, Fine Arts and Archives (MFAA) organization, the so-called "Monuments Men." In December 1945, 202 paintings, found in German salt mines 2,100 feet underground, where they had been hidden to escape the allied bombing of Berlin, were brought to the United States "for safe keeping" by the Department of the Army.

They were exhibited in 1948 at the National Gallery of Art, Washington DC, before some of them were sent on a whistle-stop tour of 13 US cities, despite furious opposition from museum directors, Gallery staff, the public, government officials, and a resolution from 98 leading art authorities demanding the immediate return of the works to Germany.

All the paintings, examples of Flemish, Dutch, German, French, English, and Italian Schools, were from museums in Berlin, and had been found in April 1945, along with 100 tons of Reichsbank gold, by the special team of art historians and experts, seconded in the US army, and charged with locating and restituting works of art looted by the Nazis.

This book is the first to consider the paintings themselves; it features 22 artworks that were in the original NGA exhibition, including four paintings on loan from Berlin, augmented by others from Cincinnati Art Museum, National Gallery of Art, Washington, The Getty Museum, Miami University (Oxford, OH), and the Taft Museum.