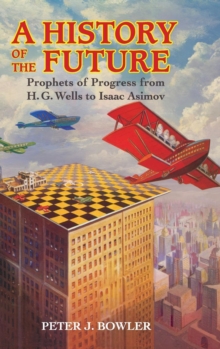 A History of the Future : Prophets of Progress from H. G. Wells to Isaac Asimov Hardback

In this wide-ranging survey, Peter J. Bowler explores the phenomenon of futurology: predictions about the future development and impact of science and technology on society and culture in the twentieth century.

Utilising science fiction, popular science literature and the novels of the literary elite, Bowler highlights contested responses to the potential for revolutionary social change brought about by real and imagined scientific innovations.

Charting the effect of social and military developments on attitudes towards innovation in Europe and America, Bowler shows how conflict between the enthusiasm of technocrats and the pessimism of their critics was presented to the public in books, magazines and exhibitions, and on the radio and television.

A series of case studies reveals the impact of technologies such as radio, aviation, space exploration and genetics, exploring rivalries between innovators and the often unexpected outcome of their efforts to produce mechanisms and machines that could change the world.