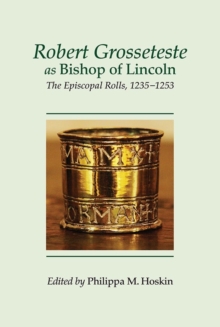 Robert Grosseteste as Bishop of Lincoln : The Episcopal Rolls, 1235-1253 1 Hardback

Part of the Kathleen Major Series of Medieval Records series

Robert Grosseteste, teacher, scholar and pastor, remains one of the dominant figures of the medieval English church.

A major influence on the early history of Oxford University, his writings on a wide range of theological and scientific subjects have been widely studied. His concern for pastoral care is also well attested; as bishop of Lincoln from 1235 until his death in 1253, he had the opportunity to exercise the pastoral office in the largest diocese in western Europe.

But how did Grosseteste's theories of pastoral care work out in practice?

The study of Grosseteste's career as a diocesan bishop has been hampered by the relative inaccessibility of the records of his episcopate, published in an unsatisfactory edition in 1911 and long out of print.

This completely new edition of Grosseteste's episcopal rolls makes it possible to take a fresh look at how he tackled the vexed issues of clerical ignorance, pluralism and non-residence in the aftermath of the reforms of the Lateran Council of 1215.

They are presented here with an introductory study and elucidatory notes. Dr Philippa M. Hoskin is Reader in medieval history at the University of Lincoln