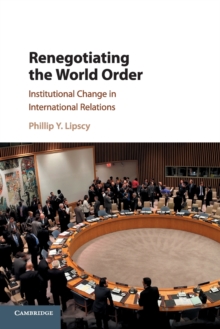 Rising powers often seek to reshape the world order, triggering confrontations with those who seek to defend the status quo.

In recent years, as international institutions have grown in prevalence and influence, they have increasingly become central arenas for international contestation.

He offers a new theory of institutional change and explains why some institutions change flexibly while others successfully resist or fall to the wayside.

The book uses a wealth of empirical evidence - quantitative and qualitative - to evaluate the theory from international organizations such as the International Monetary Fund, World Bank, European Union, League of Nations, United Nations, the International Telecommunications Satellite Organization, and the Internet Corporation for Assigned Names and Numbers.

The book will be of particular interest to scholars interested in the historical and contemporary diplomacy of the United States, Japan, and China.