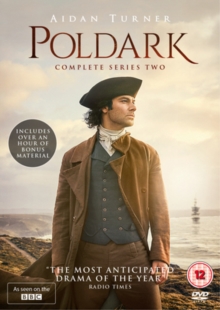 All ten episodes from the second series of the BBC drama starring Aidan Turner as Captain Ross Poldark.

After spending three years fighting in the American War of Independence, Poldark must rebuild his life in the small Cornish copper mining town he calls home.

However, when he finds his father dead, his estate in ruins and his childhood sweetheart Elizabeth (Heida Reed) engaged to his cousin, the life he once knew seems to no longer exist.

In this series, Poldark and his maid Demelza (Eleanor Tomlinson) prepare for the former's trial as elections and riots take place in Cornwall.

Burdened with debt, Poldark also tries to improve his fortunes by opening a new mine with Francis (Kyle Soller) but George Warleggan (Jack Farthing) still appears determined to crush his ambitions.