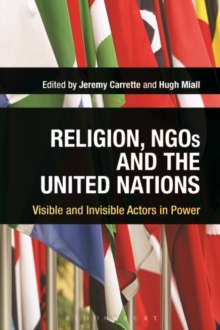 How do religious groups, operating as NGOs, engage in the most important global institution for world peace?

What processes do they adopt? Is there a "spiritual" UN today? This book is the first interdisciplinary study to present extensive fieldwork results from an examination of the activity of religious groups at the United Nations in New York and Geneva.

Based on a three and half-year study of activities in the United Nations system, it seeks to show how "religion" operates in both visible and invisible ways. Jeremy Carrette, Hugh Miall, Verena Beittinger-Lee, Evelyn Bush and Sophie-Helene Trigeaud, explore the way "religion" becomes a "chameleon" idea, appearing and disappearing, according to the diplomatic aims and ambitions.

Part 1 documents the challenges of examining religion inside the UN, Part 2 explores the processes and actions of religious NGOs - from diplomacy to prayer - and the specific platforms of intervention - from committees to networks - and Part 3 provides a series of case studies of religious NGOs, including discussion of Islam, Catholicism and Hindu and Buddhist NGOs.

The study concludes by examining the place of diplomats and their views of religious NGOs and reflects on the place of "religion" in the UN today.

The study shows the complexity of "religion" inside one of the most fascinating global institutions of the world today.