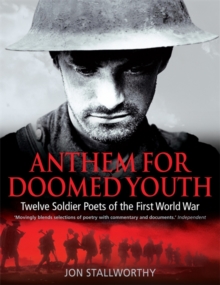 Leading poet and former professor of English Literature, Jon Stallworthy, tells the story of the lives and work of twelve major poets of the First World War and provides selections of their best work.

In part this reflected the national mood , but it revealed an almost universal failure to understand what modern mass warfare would really mean.

The story of the 'war poets' is also the story of an awakening to the full horror of what the twentieth century came to know as 'The Great War'. Wilfred Owen said, 'My subject is War - and the pity of War'.

He also said 'true Poets must be truthful'. The best war poetry was the work of writers who were also serving soldiers and was born out of their desire to tell the truth about what it was to be a soldier in the trenches - what it felt like, what it did to you and what it did to your fellow soldiers, friend or foe.

The greatness of the poetry lay not just in the writer's talent, but in the unflinching accuracy with which it portrayed their terrible circumstances.