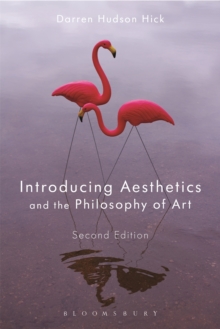 Introducing Aesthetics and the Philosophy of Art Paperback / softback

'Place in garden, lawn, to beautify landscape.'When Don Featherstone's plastic pink flamingos were first advertised in the 1957 Sears catalogue, these were the instructions.

The flamingos are placed on the cover of this book for another reason: to start us asking questions.

That's where philosophy always begins. Introducing Aesthetics and the Philosophy of Art is written to introduce students to a broad array of questions that have occupied philosophers since antiquity, and which continue to bother us today-questions like: - Is there something special about something's being art?

Can a mass-produced plastic bird have that special something? - If someone likes plastic pink flamingos, does that mean they have bad taste?

Is bad taste a bad thing? - Do Featherstone's pink flamingos mean anything?

If so, does that depend on what Featherstone meant in designing them?Each chapter opens using a real world example - such as Marcel Duchamp's signed urinal, The Exorcist, and the ugliest animal in the world - to introduce and illustrate the issues under discussion. These case studies serve as touchstones throughout the chapter, keeping the concepts grounded and relatable. With its trademark conversational style, clear explanations, and wealth of supporting features, Introducing Aesthetics and the Philosophy of Art is the ideal introduction to the major problems, issues, and debates in the field.

Now expanded and revised for its second edition, Introducing Aesthetics and the Philosophy of Art is designed to give readers the background and the tools necessary to begin asking and answering the most intriguing questions about art and beauty, even when those questions are about pink plastic flamingos.