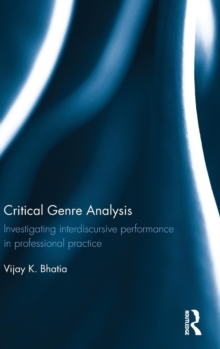 Genre theory has focused primarily on the analysis of generic constructs, with increasing attention to and emphasis on the contexts in which such genres are produced, interpreted, and used to achieve objectives, often giving the impression as if producing genres is an end in itself, rather than a means to an end.

The result of this focus is that there has been very little attention paid to the ultimate outcomes of these genre-based discursive activities, which are more appropriately viewed as academic, institutional, organizational, and professional actions and practices, which are invariably non-discursive, though often achieved through discursive means.

It was this objective in mind that the book develops an approach to a more critical and deeper understanding of interdiscursive professional voices and actions. Critical Genre Analysis as a theory of discursive performance is thus an attempt to be as objective as possible, rigorous in analytical endeavour, using a multiperspective and multidimensional methodological framework taking into account interdiscursive aspects of genre construction to make it increasingly explanatory to demystify discursive performance in a range of professional contexts.