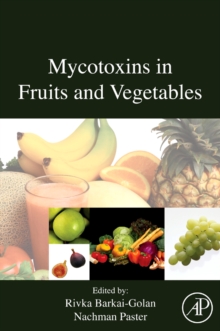 Mycotoxins in Fruits and Vegetables Hardback

Mycotoxins are toxins produced by aerobic, microscopic fungus under special conditions of moisture and temperature.

They colonize in a variety of foods from harvest to the grocer.

Mycotoxins have gained world wide interest in recent years with the revelation of the effect of these toxins on health.

A current example is the presence of ochratoxin A, a human carcinogen and nephrotoxin, in wines.

The increased concern about fruit safety has led to increased studies throughout the world and enhanced awareness for stringent regulations governing mycotoxin limits in food. Presented in three defined sections, this is the first book to provide comprehensive analysis of the main mycotoxins contaminating fruits and vegetables and their derived products.

The first section provides a safety evaluation of mycotoxins in fruits and vegetables, details regarding factors affecting mycotoxin production and diffusion in the fruit tissue, and recent methods for detection of mycotoxigenic fungi and mycotoxins produced by the fungi.

The second part takes a critical look at the main individual mycotoxins and the third section focuses on approaches for prevention and control.