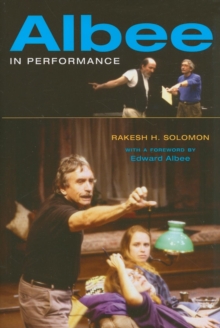 A premier playwright, Edward Albee is also a gifted director.

Albee in Performance details Albee's directorial vision and how that vision animates his plays.

Having had extraordinary access to Albee as director, Rakesh H.

Solomon reveals how Albee has shaped his plays in performance, the attention he pays to each aspect of theater, and how his conception of the key plays he has directed has evolved over a five-decade career.

Solomon pays careful attention to the major works, from The American Dream and Zoo Story to Albee's best-known work, Who's Afraid of Virginia Woolf?, as well as to later plays such as Marriage Play and Three Tall Women.

The book also includes interviews with Albee and his collaborators on all aspects of staging, from rehearsal to performance.