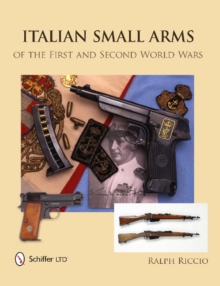 This is the first comprehensive work, in either English or Italian, to address Italian small arms used during World War I and World War II.

It describes each weapon and covers the developmental history and use of all Italian designed and produced pistols, rifles, submachine guns and machine guns used during both conflicts, as well as prototype weapons and foreign weapons used by the Italians.

In addition to the new material, it also corrects previously published errors about Italian weapons.