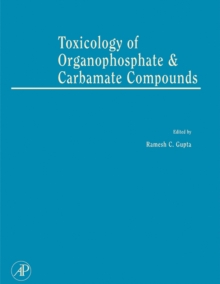 This text/reference book provides the most comprehensive coverage of anticholinesterase compounds (Organophosphates and Carbamates), which constitute the largest number of chemicals that are primarily used as insecticides in agriculture, industry, and around the home/garden.

Some OPs (nerve agents) have been used in chemical warfare and terrorist attacks, while some OPs and CMs have been recommended as therapeutic agents in human medicine as well as in veterinary medicine.

Many chemicals of both classes are extremely toxic and lack selectivity, thus their inadvertent/accidental use continues to pose a threat to human and animal health, aquatic systems and wildlife.

These anticholinesterase agents produce a variety of toxicological effects in target and nontarget organs. In light of this complexicity, this multi-authored book is written by the well known scientists from many countries.

The book is organized into nine sections, with a total of 49 chapters, to provide in-depth knowledge on various aspects of OP and CM compounds, including their use, classification, mechanism-based toxicity, and prophylactic and therapeutic measurements.

Section-VI with 5 chapters is specifically devoted to risk assessment, and safety and regulatory guidelines for pesticides.