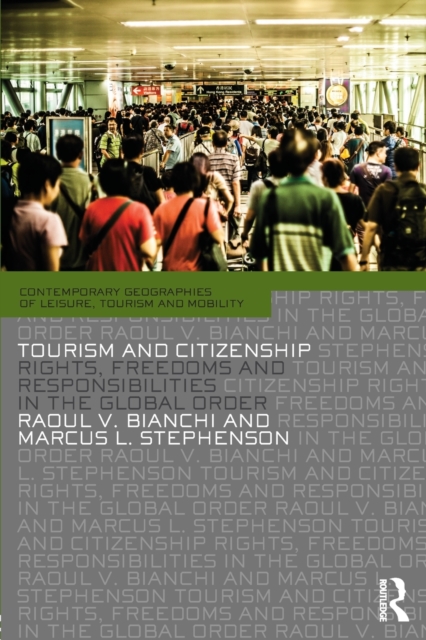 Tourism and Citizenship : Rights, Freedoms and Responsibilities in the Global Order Paperback / softback

Part of the Contemporary Geographies of Leisure, Tourism and Mobility series

More than sixty years since the 1948 Universal Declaration of Human Rights first enshrined the right to freedom of movement in an international charter of human rights, the issue of mobility and the right to tourism itself have become increasingly significant areas of scholarly interest and political debate.

However, despite the fact that cross-border travel implies certain citizenship rights as well as the material capacity to travel, the manifold intersections between tourism and citizenship have not received the attention they deserve in the literature. This book endeavours to fill this gap by being the first to fully examine the role of tourism in wider society through a critically-informed sociological reflection on the unfolding relationships between international tourism and distinct renderings of citizenship, with particular emphasis on the ideological and political alignments between the freedom of movement and the right to travel.

The text weaves its analysis of citizenship and travel in the context of addressing large-scale societal transformations engendered by globalization, neoliberalism and the geopolitical realignments between states, as well as comprehending the internal reconfiguring of the relationship between citizens and states themselves.

By doing so, it focuses on key themes including: tourism and social citizenship rights; race, culture and minority rights; states, markets and the freedom of movement; tourism, peace and geo-politics; consumerism and class; and, ethical tourism, global citizenship and cosmopolitanism.

The book concludes that the advancement of genuinely democratic and just forms of tourism must be commensurate with demands for distributive justice and a democratic politics of mobility encompassing all of humanity. This timely and significant contribution to the sociology and politics of international tourism through the lens of citizenship is a must read for students and scholars in both in the fields of tourism and social science. The royalties received from this book will be donated to the International Porter Protection Group.