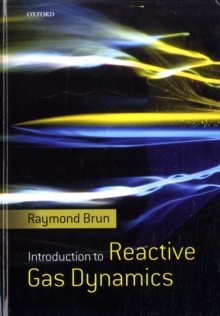 In high energy gas flows, at high velocities and high temperatures, physical and chemical processes such as molecular vibrational excitation, dissociation, ionisation or various reactions take place and deeply influence the structure of the flows.

This book presentsa general introductory study of these media.

In the first part their fundamental statistical aspects are described, starting from their discrete structure and taking into account the interactions between elementary particles: transport phenomena, relaxation and kinetics as well as their coupling areanalysed and illustrated by many examples.

The second part deals with the macroscopic re-entry bodies.

Finally, the experimental aspects of these flows, their simulations in shock tubes and shock tunnels are described, as well as their application, particularly in the aerospatial domain. This book is intended for students that have acquired a basic knowledge in thermodynamics, statistical physics and fluid mechanics.

It will also be of interest to engineers in research and industry, in particular in the aerospace industry, and more generally to all researchers trying to simulate and calculate complex reactive flows.