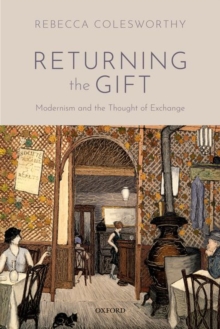 Returning the Gift : Modernism and the Thought of Exchange Hardback

From debates about reparations to the rise of the welfare state, the decades following World War I saw a widespread turn across disciplines to questions about the nature and role of gifts: What is a gift?

What do gifts mean and do? Which individuals and institutions have the authority to give?

The book begins by revisiting the locus classicus of twentieth-century gift theory - the French sociologist Marcel Mauss's 1925 essay, The Gift: The Form and Reason for Exchange in Archaic Societies.

His title notwithstanding, the gift Mauss envisions is not primitive or pre-capitalist, but rather a distinctively modern phenomenon. Subsequent chapters offer sustained, nuanced readings of novels and nonfiction by Virginia Woolf, Jean Rhys, Gertrude Stein, and H.D. from the 1920s to 1940s, underscoring the ways their writing is illuminated by contemporaneous developments in the social sciences, economics, and politics, while also making a case for theirunique contributions to broader debates about gifts.

Not only do these writers insist that literature is a special kind of gift, but they also pose challenges to the gift's feminization in the work of both their Victorian forebears and contemporary male theorists.

Each of these writers uses tropes and narratives of giving - of hospitality, sympathy, reciprocity, charity, genius, and kinship - to imagine more egalitarian social possibilities under the conditions of the capitalist present.

Thelanguage of the gift is not, as we might expect, a mark of hostility to the market so much as a means of giving form to the 'society' in market society - of representing everyday experiences of exchange that the myth of the free market works, even now, to render unthinkable.