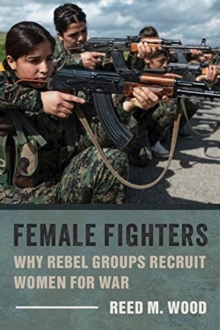 The presence of women combatants on the battlefield-especially in large numbers-strikes many observers as a notable departure from the historical norm.

Yet women have played a significant active role in many contemporary armed rebellions.

Over recent decades, numerous resistance movements in many regions of the globe have deployed thousands of female fighters in combat. In Female Fighters, Reed M. Wood explains why some rebel groups deploy women in combat while others exclude women from their ranks, and the strategic implications of this decision.

However, Wood finds that, regardless of the wartime resource challenges they face, religious fundamentalist rebels consistently resist utilizing female fighters.

A rich, data-driven study, Female Fighters presents a systematic, comprehensive analysis of the impact women's participation has on organized political violence in the modern era.