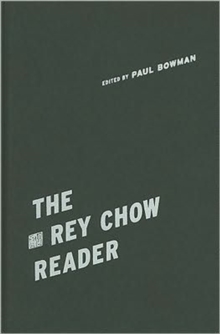 Rey Chow is arguably one of the most prominent intellectuals working in the humanities today.

Characteristically confronting both entrenched and emergent issues in the interlocking fields of literature, film and visual studies, sexuality and gender, postcolonialism, ethnicity, and cross-cultural politics, her works produce surprising connections among divergent topics at the same time as they compel us to think through the ethical and political ramifications of our academic, epistemic, and cultural practices.

This anthology - the first to collect key moments in Chow's engaging thought - provides readers with an ideal introduction to some of her most forceful theoretical explorations. Organized into two sections, each of which begins with a brief statement designed to establish linkages among various discursive fields through Chow's writings, the anthology also contains an extensive Editor's Introduction, which situates Chow's work in the context of contemporary critical debates.

For all those pursuing transnational cultural theory and cultural studies, this book is an essential resource. Praise for Rey Chow "[Rey Chow is] methodologically situated in the contentious spaces between critical theory and cultural studies, and always attending to the implications of ethnicity."--Social Semiotics "Rich and powerful work that provides both a dazzling synthesis of contemporary cultural theory and at the same time an exemplary critique of Chinese cinema."--China Information "Should be read by all who are concerned with the future of human rights, liberalism, multiculturalism, identity politics, and feminism."--Dorothy Ko "Wide-ranging, theoretically rich, and provocative...completely restructures the problem of ethnicity."--Fredric Jameson