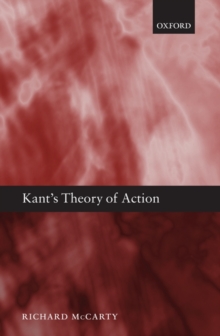 The theory of action underlying Immanuel Kant's ethical theory is the subject of this book.

What 'maxims' are, and how we act on maxims, are explained here in light of both the historical context of Kant's thought, and his classroom lectures on psychology and ethics.

Arguing against the current of much recent scholarship, Richard McCarty makes a strong case for interpreting Kant as having embraced psychological determinism, a version of the 'belief-desire model' ofhuman motivation, and a literal, 'two-worlds' metaphysics.

On this interpretation, actions in the sensible world are always effects of prior psychological causes.

Their explaining causal laws are the maxims of agents' characters. And agents act freely if, acting also in an intelligible world, whatthey do there results in their having the characters they have here, in the sensible world.