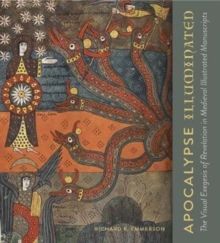 With its rich symbolism, complex narrative, and stunning imagery, the Apocalypse, or Revelation of John, is arguably the most memorable book in the Christian Bible.

In Apocalypse Illuminated, Richard Emmerson explores how this striking visionary text is represented across seven centuries of medieval illustrations. Focusing on twenty-five of the most renowned illustrated Apocalypse manuscripts, from the earliest extant Carolingian ones produced in the ninth century to the deluxe Apocalypse made for the dukes of Savoy and completed in 1490, Emmerson examines not only how they illustrate the biblical text, but also how they interpret it for specific and increasingly diverse audiences.

He discusses what this imagery shows us about expectations for the Apocalypse as the year 1000 approached, its relationship to Spanish monasticism on the Christian-Muslim frontier and to thirteenth-century Joachimist prophetic beliefs, and the polemical reinterpretations of Revelation that arose at the end of the Middle Ages.

The resulting study includes historical and stylistic comparisons, highlights innovative features, and traces iconographic continuities over time, including the recurring apocalyptic patterns, events, figures, and motifs that characterize Apocalypse illustrations throughout the Middle Ages. Gorgeously illustrated and written in lively and accessible prose, this is a masterful analysis of over seven hundred years of Apocalypse manuscripts by one of the most preeminent scholars of medieval apocalypticism.