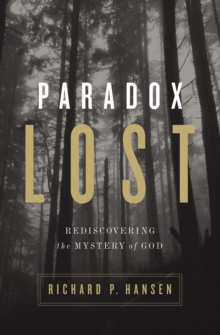 Too often the tensions and unanswerable questions of Scripture and the Christian life are seen as barriers to faith.

In Paradox Lost, pastor and author Richard Hansen shows that they are exactly the opposite-indeed, God's mysteries are one of the places where we may encounter him most closely. In exchange for Enlightenment-based rationalism that can stunt spiritual imagination, Hansen invites readers to:Discern that there is a hiddenness to God that can be inviting rather than threateningAppreciate that God is far greater than we sometimes assume, and to adjust our mental maps to make more space for aweRealize that faith and reason are not enemies but rather dance partners that complement one anotherHansen examines three kinds, or "orders," of biblical paradox, each at a deeper level than the last, demonstrating for readers that paradox is both endemic to modern life and also a natural part of the landscape of Christian faith.

Paradox Lost doesn't seek to solve or justify paradox; instead, it looks through paradox toward what it reveals-namely a holy, mysterious, and awesome God.