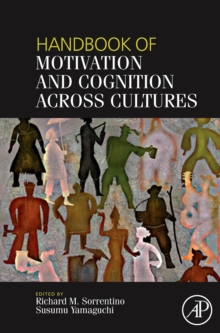 Handbook of Motivation and Cognition Across Cultures Hardback

In recent years there has been a wealth of new research in cognition, particularly in relation to supporting theoretical constructs about how cognitions are formed, processed, reinforced, and how they then affect behavior.

Many of these theories have arisen and been tested in geographic isolation.

It remains to be seen whether theories that purport to describe cognition in one culture will equally prove true in other cultures.

The Handbook of Motivation and Cognition Across Cultures is the first book to look at these theories specifically with culture in mind.

The book investigates universal truths about motivation and cognition across culture, relative to theories and findings indicating cultural differences. Coverage includes the most widely cited researchers in cognition and their theories- as seen through the looking glass of culture.

The chapters include self-regulation by Tory Higgins, unconscious thought by John Bargh, attribution theory by Bernie Weiner, and self-verification by Bill Swann, among others.

The book additionally includes some of the best new researchers in cross-cultural psychology, with contributors from Germany, New Zealand, Japan, Hong Kong, and Australia.

In the future, culture may be the litmus test of a theory before it is accepted, and this book brings this question to the forefront of cognition research.