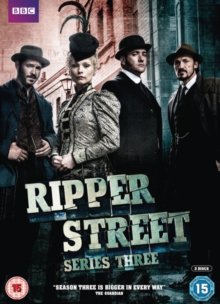 All eight episodes from the third series of the TV drama starring Matthew Macfadyen as a detective trying to maintain the law on the streets of Whitechapel in the wake of the Jack the Ripper murders.

Meanwhile, Reid's long-lost daughter Matilda (Anna Burnett), who was previously believed to have drowned, returns to reunite with her father.

The episodes are: 'Whitechapel Terminus', 'The Beating of Her Wings', 'Ashes and Diamonds', 'Your Father, My Friend', 'Heavy Boots', 'The Incontrovertible Truth', 'Live Free, Live True' and 'The Peace of Edmund Reid'.