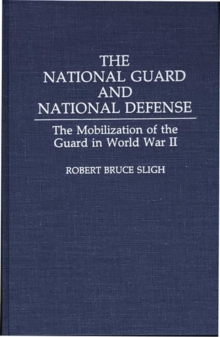 The National Guard and National Defense : The Mobilization of the Guard in World War II Hardback

by Robert B. Sligh

The National Guard Association's insistence on a federal role for the Guard prompted the creation of dual status for Guardsmen.

After 1933 they were not only soldiers of the state, but of the nation as well.

The first test of the Guard's new status came as the world plunged into the Second World War.

The compromises, conflicts, emotions, and legal precedents involved in the 1940-41 mobilization were to affect the National Guard and national defense strategy for many years to come.

Yet, this important aspect of American history has been largely ignored.

In most works on the Roosevelt era the federalization of 18 Guard divisions--which doubled the size of the Army--is given one or two lines.

Guard historians have paid close attention to Guardsmen entering federal camps, but gloss over the politics of Army-Guard maneuvering prior to mobilization.

This study demonstrates the importance of the political situation between these two defense establishments and their consequences for later defense policy and legislation. Robert Bruce Sligh shows how the mobilization in 1940-41 spurred increased federal control over the Guard.

Although the Army was hesitant to take the Guard into active service, once mobilized the Guard was rapidly co-opted.

The Guard's dual goals of increased federal money while staying aloof from federal control were doomed to fail.

This book will be of interest to those interested in American military history, national defense policy, National Guard history, and selective service legislation.