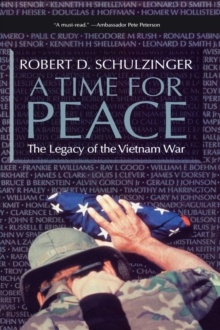 A Time for Peace : The Legacy of the Vietnam War Paperback / softback

The Vietnam War left wounds that have taken three decades to heal-indeed some scars remain even today.

In A Time for Peace, prominent American historian Robert D.

Schulzinger sheds light on how deeply etched memories of this devastating conflict have altered America's political, social, and cultural landscape.

Schulzinger examines the impact of the war from many angles.

He traces the long, twisted, and painful path of reconciliation with Vietnam, the heated controversy over soldiers who were missing in action and how it resulted in years of false hope for military families, and the outcry over Maya Lin's design for the Vietnam Memorial in Washington.

In addition, the book examines the influx of over a million Vietnam refugees and Amerasian children into the US and describes the plight of Vietnamveterans, many of whom returned home alienated, unhappy, and unappreciated, though some led productive post-war lives.

Schulzinger looks at how the controversies of the war have continued to be fought in books and films, ranging from novels such as Going After Cacciato and Paco's Story to such movies asThe Green Berets (directed by and starring John Wayne), The Deer Hunter, Apocalypse Now, and Rambo.

Perhaps most important, the author explores the power of the Vietnam metaphor on foreign policy, particularly in Central America, Somalia, the Gulf War, and the war in Iraq.

We see how the "lessons" of the war have been reinterpreted by different ends of the political spectrum.