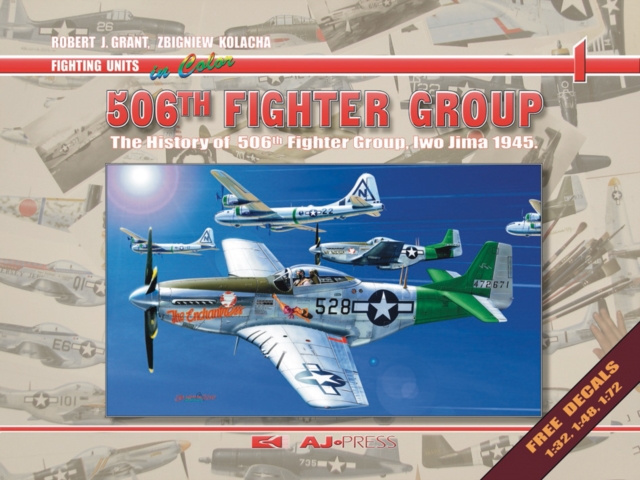 Part of the Fighting Units in Colour series

This book is the ultimate visual reference guide to the 506th Fighter Group, describing the history of the Group and its squadrons, as well as the distinctive camouflages of their aircraft.

Numerous colour plates and photos documenting their markings and insignia are included, most of them obtained from private collectors and previously undocumented. The 506th Fighter Group was established on 5 October 1944 and activated on 21 October 1944, at Lakeland Army Air Field/Drane Field, Florida.

The group consisted of three squadrons: 457th, 458th and the 459th Fighter Squadrons.

From its activation, the planned missions of the 506th were very long range (VLR) escort missions of B-29 Superfortress bombers in the Pacific Theatre.

They flew air combat missions at Guam, Tinian, Saipan, and Iwo Jima, attacking airfields, anit-aircraft emplacements, barracks, radio and radar stations, as well as escorting B-29 bombers in raids against Japan. With 90 photographs, a mixture of colour and black and white, as well as 33 colour profiles, decals, and line drawings, this book is a must for any aviation modeller or historian, interested in finding out more about this elite, awe-inspiring squadron, its pilots and their machines as they fought their crucial campaign against the Japanese in the Pacific War.