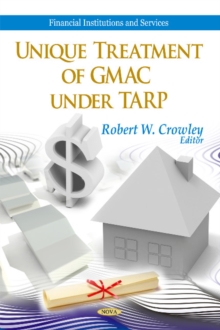 GMAC is a diversified financial services firm that derives its revenues from automotive finance, where it holds a dominant position, as well as mortgage operations, insurance operations, and commercial finance.

The U.S. government has spent a total of $17.2 billion to support GMAC under the TARP.

As part of the government bail-out effort, GMAC has received special treatment apart from the funds in order to meet the capital buffers established under the bank "stress tests" because it could not raise funds from private sources.

This book examines the unique treatment given GMAC under the TARP.