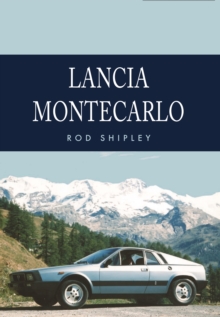 This book describes the development of the Lancia Montecarlo from the original design study by Fiat in Italy, the arrangement with the well-known Italian design house of Pininfarina and the allocation to Fiat's Lancia division.

The author also provides the most up-to-date and accurate information regarding specifications, production figures and anecdotal background. Also included will be a car-by-car, driver-by-driver, race-by-race study of the eleven cars that competed in the WCM at various times.

The Montecarlo was the first car ever to be built in its entirety by Pininfarina.

Production began in 1975 and between then and 1982 some 7,500 cars were built at Pininfarina's new manufacturing facility near Turin. Of this total production somewhere around 1,000 cars came to the UK while a further 1,850 were destined for the North American market where they were renamed the Lancia Scorpion (Chevrolet had already copyrighted the name Montecarlo in the US). The book covers the turbocharged racing variants of the Montecarlo that competed in the World Endurance Championship for Makes between 1979 and 1982, winning the championship outright on two occasions. The Montecarlo also formed the basis for the subsequent Lancia 037 which competed with great success in the World Rally Championship during the early 1980s. This is the first book in English about this car written by an author with in-depth knowledge of his subject.