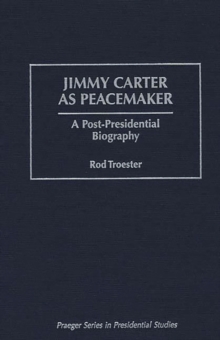 Jimmy Carter left the White House in January of 1981 in the wake of the Iranian hostage crisis, a faltering economy, and a stunning defeat at the polls.

At the relatively young age of 56, Carter joined the elite fraternity of former presidents.

When contemporary U.S. presidents have left office, they have generally written their memoirs, established their presidential libraries, served on corporate boards, or assumed elder statesman roles.

Jimmy Carter has taken a different path, and this study demonstrates how the Carter post-presidency has redefined the role of former president and refurbished Carter's image.

The author argues that Carter has shown that through active involvement in world affairs and humanitarian causes, and through the careful investment of post-presidential credibility and political capital, a former president can make significant contributions to a more peaceful world.