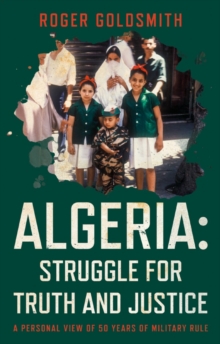 Algeria: Struggle for Truth and Justice : A Personal View of 50 Years of Military Rule Paperback / softback

Bodies lying in pools of blood in the streets of Algiers all day, buildings destroyed by bombs and fire, up to a million French and others fleeing the country...

In his personal account, Algeria: Struggle for Truth and Justice, he follows French and French Algerian sources that argue that le pouvoir, generals of the security forces, the DRS, manipulating armed Islamists, were behind the assassination of a president, the hijacking of a plane, some 200,000 deaths, torture and perhaps 18,000 enforced disappearances in the 1990s. The tragedy of the 1990s has been presented as a 'national tragedy' with nobody responsible for crimes against humanity.

Voluntary work for Amnesty International on the human rights situation there led Roger to work on behalf of families of the disappeared.

Later, he assisted Nassera Dutour, who has been leading and inspiring families in 20 years of struggle, vainly seeking information about their relatives. Is Algeria now at a turning point in its history? Since February 2019, hundreds of thousands of people, perhaps millions, many of them young, have marched peaceably in the streets of Algiers and throughout the country demanding change, democracy and an end to military rule.

Might it now be possible for families to look forward to the day when their efforts to obtain truth and justice are successful and those responsible are tried before an International Criminal Court?'.