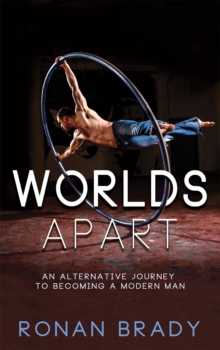 'Ronan is emblematic of how Ireland has changed.' - Panti Bliss At just under six foot in his socks and weighing in at fourteen stone, Ronan Brady is a solid slab of rarest Roscommon meat.

He has a natural tendency to throw himself about - some would say recklessly, others would say enthusiastically - into whatever he sets himself to.

Ronan had a 'normal' childhood in Roscommon and knew by the time he was a teenager that when he grew up he wanted to play football for his county and become a teacher. Ronan had achieved his life ambition when he took up 'Flying' as a hobby. A hobby that transformed his life and took him to heights he never dreamed of, performing in the smash hit show Riot alongside Panti Bliss, and going on to tour the world. Worlds Apart is an open, humorous account of Ronan's life journey,