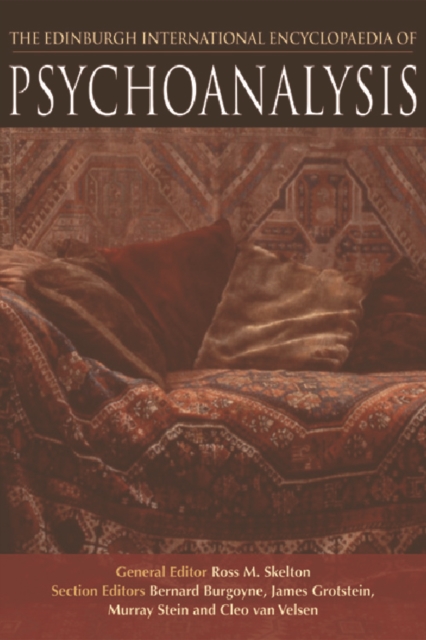 With its wide, objective and catholic vision, the Encyclopaedia demonstrates that psychoanalysis is a single discipline, very much greater than any particular movement, school or individual, including its founder, Freud.

Thus the book contains authoritative entries on all the most important authors, practitioners, concepts, movements, schools, debates and controversies in psychoanalysis and its offspring, past and present.

A precis essay is given of each school amplified by explanations of all key terms within that school. Entries are alphabetically arranged, fully cross-referenced, many with suggestions for further reading.

Most importantly the book features both contributors and entries reflecting the various disciplines such as Feminism, Literature, Philosophy, Art and Anthropology that have contributed to the development of psychoanalysis or been influenced by it.

Besides an immense array of topics on psychoanalysis contributed by psychoanalysts themselves, there are also entries on many topics written by psychiatrists, psychologists, psychotherapists, philosophers, medical researchers, historians, literary critics, anthropologists, linguists and other specialists.

International in scope, the Encyclopaedia also draws on a geographically wide field of authors.

Key Features * Entries on all the concepts of the main psychoanalytic schools of thought including the analytic psychologist, Jung. * Full coverage of: Freud, Fairbairn, Jung, Klein, Bion, Kohut, Winnicott and Lacan.

Existential psychoanalysis is covered in detail, as are Group psychoanalysis, Child psychotherapy and Psychiatry. *Some 50 extended essays on links with other subjects including: Philosophy, Ethology, Literature, Film, Politics, Feminism, Neuroscience, Human Nature, Religion and many more. * Entries on all the main figures of psychoanalysis, past and present as well as the history and practice of psychoanalysis in 47 countries worldwide.