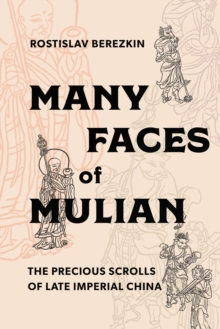 Many Faces of Mulian : The Precious Scrolls of Late Imperial China Hardback

The story of Mulian rescuing his mother's soul from hell has evolved as a narrative over several centuries in China, especially in the baojuan (precious scrolls) genre.

This genre, a prosimetric narrative in vernacular language, first appeared around the fourteenth century and endures as a living tradition.

In exploring the evolution of the Mulian story, Rostislav Berezkin illuminates changes in the literary and religious characteristics of the genre.

He also examines material from other forms of Chinese literature and from modern performances of baojuan, tracing their transformation from tools of Buddhist proselytizing to sectarian propaganda to folk ritualized storytelling.

Ultimately, he reveals the special features of baojuan as a type of performance literature that had its foundations in multiple literary traditions.