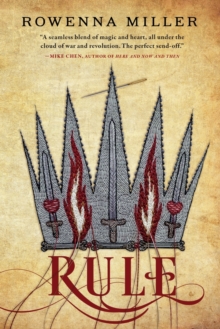 In this epic conclusion to the Unraveled Kingdom trilogy that began with Torn and Fray, the magical seamstress Sophie Balstrade joins forces with her brother the revolutionary leader and her betrothed the Crown Prince in a deadly bid to change history. The civil war that the charm caster Sophie and the Crown Prince Theodor tried so desperately to avert has come to Galitha.

While Theodor joins Sophie's brother and his Reformist comrades in battle, hoping to turn the tide against the better-supplied and better-trained Royalist army, Sophie leverages the only weapon she has: charm and curse casting.

She weaves her signature magic into uniforms and supplies, but soon discovers that the challenges of a full-scale war are far greater than the entrepreneurial concerns of her small Galithan dress shop.

The fractured leadership of the Reformist army must coalesce, the people of Galitha unite against enormous odds, and Sophie create more than a little magical luck, in order to have a chance of victory. The Unraveled KingdomTornFrayRule