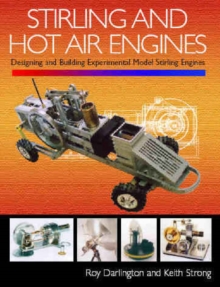 Hot air engines, often called Stirling engines, are among the most interesting and intriguing engines ever to be designed.

They run on just about any fuel, from salad oil and hydrogen to solar and geothermal energy.

They produce a rotary motion that can be used to power anything, from boats and buggies to fridges and fans. This book demonstrates how to design, build and optimise Stirling engines.

A broad selection of Roy's engines is described, giving a valuable insight into the many different types and a great deal of information relating to the home manufacture of these engines is included in the workshop section. AUTHOR: Roy Darlington is well known to many model engineering enthusiasts and never tires of explaining the Stirling cycle to every increasing audiences.

In retirement he became a founding member of the Stirling Engine Society. Keith Strong has worked in many areas of engineering.

He has created designs for multi-cylinder and rotary Stirling engines working extensively with CAD and is drafting plans for more of Roy's engines. 400 colour photographs