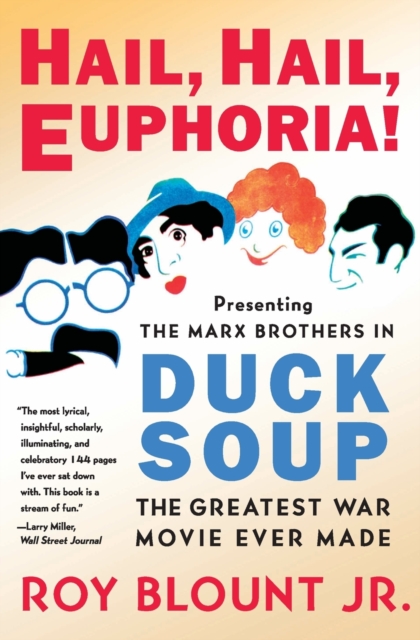 Seventy-seven years ago a slim, agile, quick-witted, self-assured young man, identifying with but transcending his ethnic minority, was summoned to save a nation from financial ruin.

As the nation's new president he brought together a team of rivals, a band of brothers. And those brothers' names: Pinky, Chicolini, and Lt.

Bob Roland. And that leader's name: Rufus T. Firefly. It was a movie, and what a movie: "Duck Soup", the Marx Brothers at their most intense, in their finest hour.

In "Hail, Hail, Euphoria!" Roy Blount, Jr. takes us through the history and making of "Duck Soup", examining the comedic genius of the Marx Brothers with the insight and appreciation of a true fan.

Though first released in theaters nearly eighty years ago, "Duck Soup" continues to impress audiences and serve as an important cultural reference. In "Hannah and Her Sisters", Woody Allen's character, Mickey Sachs, is considering suicide when he happens to see a bit of Duck Soup and has an epiphany: How can anyone even think of killing himself when this world affords such high-low comedy as the Brothers' spectacular musical number, "The Country's Going to War", in which the call to arms involves, among many other rousing elements, takeoffs on gospel ("All God's Chillun Got Guns") and the Virginia reel.

There is nothing anywhere else in the history of American culture quite like Harpo's contribution to the do-si-do.

You can't write a whole book about how funny a movie is.

But this is a movie that can be discussed and probed in many directions.

The parallels to current politics are obvious, and then there are links to be made involving Woody Allen and mirrors ("the Duck Soup" scene in which Harpo pretends to be Groucho's reflection is famous, but there's a little-noted Allen mirror scene whose autobiographical resonance is startling), George W.

Bush and projectiles, Margaret Dumont and moms, Groucho and Karl, Jews and Irishmen.