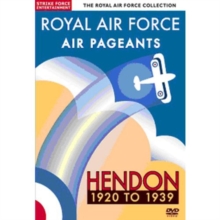 A documentary history of the Royal Air Force's annual Hendon Air Pageants, which were held during the inter-war years at the now defunct airfield where today's RAF Museum is situated.

These airshows were the forerunner of the post-war Farnborough Air Shows, and regularly attracted crowds of half a million with over 250 aircraft in the sky.