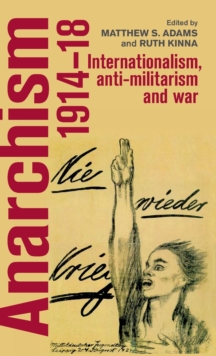 Anarchism 1914-18 is the first systematic analysis of anarchist responses to the First World War.

It examines the interventionist debate between Peter Kropotkin and Errico Malatesta which split the anarchist movement in 1914 and provides a historical and conceptual analysis of debates conducted in European and American movements about class, nationalism, internationalism, militarism, pacifism and cultural resistance.

Contributions discuss the justness of war, non-violence and pacifism, anti-colonialism, pro-feminist perspectives on war and the potency of myths about the war and revolution for the reframing of radical politics in the 1920s and beyond.

Divisions about the war and the experience of being caught on the wrong side of the Bolshevik Revolution encouraged anarchists to reaffirm their deeply-held rejection of vanguard socialism and develop new strategies that drew on a plethora of anti-war activities. -- .