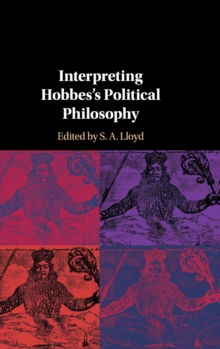 Edited by S. A. (University of Southern California) Lloyd

The essays in this volume provide a state-of-the-art overview of the central elements of Hobbes's political philosophy and the ways in which they can be interpreted.

The volume's contributors offer their own interpretations of Hobbes's philosophical method, his materialism, his psychological theory and moral theory, and his views on benevolence, law and civil liberties, religion, and women.

Hobbes's ideas of authorization and representation, his use of the 'state of nature', and his reply to the unjust 'Foole' are also critically analyzed.

The essays will help readers to orient themselves in the complex scholarly literature while also offering groundbreaking arguments and innovative interpretations.

The volume as a whole will facilitate new insights into Hobbes's political theory, enabling readers to consider key elements of his thought from multiple perspectives and to select and combine them to form their own interpretations of his political philosophy.