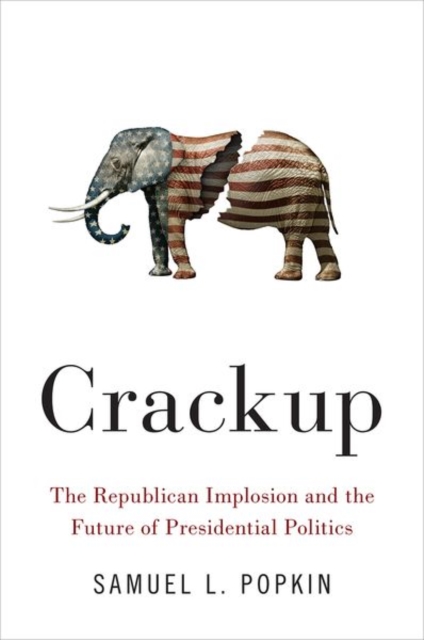 Crackup : The Republican Implosion and the Future of Presidential Politics Hardback

In Crackup, the eminent American politics scholar Samuel Popkin tells the story of how the Republican Party fractured into uncompromising groups with irreconcilable demands.

Changes in campaign finance laws and the proliferation of mass media opened the way for newly energized groups to split the party.

The 2002 "McCain-Feingold" campaign finance reform bill aimed to weaken the power of big corporations and strengthen political parties by ending corporatedonations to the parties.

Instead, it weakened legislative leaders and made bipartisanship a curse word. Popkin argues that moving money outside the political parties fueled the rise of single-issue advocacy groups and Super PACs funded by billionaires with pet issues.

This allowed self-promoting politicians to undermine colleagues with an unprecedented use of tactics once only used to disrupt the other party.

One such politician was Ted Cruz, the first Republican senator with the oratorical skills and intelligence to exploit the new possibilities.

He effectively promoted himself at the expense ofthe party, mobilized other obstructionists in congress, and blocked compromises on immigration and healthcare.

Into this abyss came Donald J. Trump, who took advantage of the party's inability to do anything for Republican voters struggling with economic decline.

No other candidate, when forced totry to satisfy the irreconcilable demands of major donors and party leaders, could offer a credible alternative to his moon-promising bravado.

A novel structural explanation of why the GOP ended up with Trump as their standard bearer, Crackup forces us to look at the deeper forces set in motion over a decade ago.

It also reveals how lone-wolf figures like Cruz are inevitable given the new rules of the game.

Unless the system for financing elections changes, we will continue to see opportunists emerge-in both parties-to block intra-party compromise.