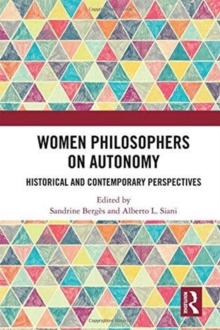 We encounter autonomy in virtually every area of philosophy: in its relation with rationality, personality, self-identity, authenticity, freedom, moral values and motivations, and forms of government, legal, and social institutions.

At the same time, the notion of autonomy has been the subject of significant criticism.

Some argue that autonomy outweighs or even endangers interpersonal or collective values, while others believe it alienates subjects who don't possess a strong form of autonomy.

These marginalized subjects and communities include persons with physical or psychological disabilities, those in dire economic conditions, LGBTI persons, ethnic and religious minorities, and women in traditional communities or households.

This volume illuminates possible patterns in these criticisms of autonomy by bringing to light and critically assessing the contribution of women throughout the history of philosophy on this important subject.

The essays in this collection cover a wide range of historical periods and influential female philosophers and thinkers, from medieval philosophy through to contemporary debates.

Women Philosophers on Autonomy will enlighten and inform contemporary debates on autonomy by bringing into the conversation previously neglected female perspectives from throughout history.