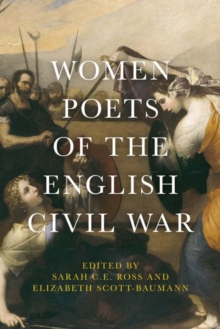 It presents these poems in modern-spelling, clear-text versions for classroom use, and for ready comparison to mainstream editions of male poets' work.

The anthology reveals the diversity of women's poetry in the mid-seventeenth century, across political affiliations and forms of publication.

Notes on the poems and an introduction explain the contexts of Civil War, religious conflict, and scientific and literary development.

The anthology enables a more comprehensive understanding of seventeenth-century women's poetic culture, both in its own right and in relation to prominent male poets such as Marvell, Milton and Dryden. -- .