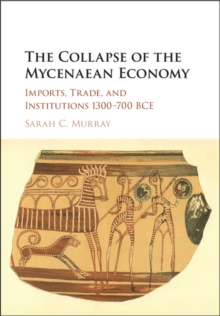 The Collapse of the Mycenaean Economy : Imports, Trade, and Institutions 1300-700 BCE Hardback

In this book, Sarah Murray provides a comprehensive treatment of textual and archaeological evidence for the long-distance trade economy of Greece across 600 years during the transition from the Late Bronze to the Early Iron Age.

Analyzing the finished objects that sustained this kind of trade, she also situates these artifacts within the broader context of the ancient Mediterranean economy, including evidence for the import and export of commodities as well as demographic change.

Murray argues that our current model of exchange during the Late Bronze Age is in need of a thoroughgoing reformulation.

She demonstrates that the association of imported objects with elite self-fashioning is not supported by the evidence from any period in early Greek history.

Moreover, the notional 'decline' in trade during Greece's purported Dark Age appears to be the result of severe economic contraction, rather than a severance of access to trade routes.