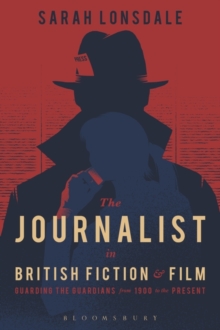 The Journalist in British Fiction and Film : Guarding the Guardians from 1900 to the Present Paperback / softback

Why did Edwardian novelists portray journalists as swashbuckling, truth-seeking super-heroes whereas post-WW2 depictions present the journalist as alienated outsider?

As newspaper journalism faces the double crisis of a lack of trust post-Leveson, and a lack of influence in the fragmented internet age, how do cultural producers view journalists and their role in society today? In The Journalist in British Fiction and Film Sarah Lonsdale traces the ways in which journalists and newspapers have been depicted in fiction, theatre and film from the dawn of the mass popular press to the present day.

The book asks first how journalists were represented in various distinct periods of the 20th century and then attempts to explain why these representations vary so widely.

This is a history of the British press, told not by historians and sociologists, but by writers and directors as well as journalists themselves.

Within these texts and films there is perhaps also a clue as to how the best aspects of 'Fourth estate' journalism can survive in the digital age. Authors covered in the volume include: Martin Amis, Graham Greene, George Orwell, Pat Barker, Evelyn Waugh, Elizabeth Bowen, Arnold Wesker and Rudyard Kipling.

Television and films covered include House of Cards (US and UK versions), Spotlight, Defence of the Realm, Secret State and State of Play.