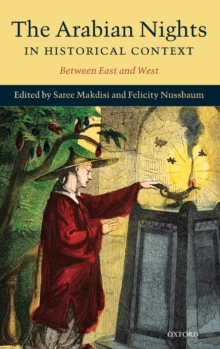 The Arabian Nights in Historical Context : Between East and West Hardback

Alf layla wa layla (known in English as A Thousand and One Nights or The Arabian Nights) changed the world on a scale unrivalled by any other literary text. Inspired by a fourteenth-century Syrian manuscript, the appearance of Antoine Galland's twelve-volume Mille et Une Nuits in English translation (1704-1717), closely followed by the Grub Street English edition, drew the text into European circulation.

Over the following threehundred years, a widely heterogeneous series of editions, compilations, translations, and variations circled the globe to reveal the absorption of The Arabian Nights into English, Continental, and global literatures, and its transformative return to modern Arabic literature, where it now enjoys a degree of prominence that it had neverattained during the classical period. Beginning with a thorough introduction situating The Arabian Nights in its historical and cultural contexts-and offering a fresh examination of the text's multiple locations in the long history of modern Orientalism-this collection of essays by noted scholars from 'East', 'West', and in-between reassesses the influence of the Nights in Enlightenment and Romantic literature, as well as the text's vigorous after-life in the contemporaryArabic novel.