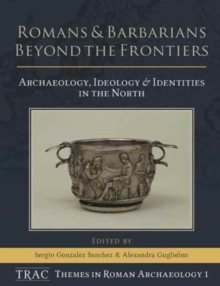 Romans and Barbarians Beyond the Frontiers : Archaeology, Ideology and Identities in the North Hardback

Part of the TRAC Themes in Archaeology series

This first thematic volume of the new series TRAC Themes in Roman Archaeology brings renowned international experts to discuss different aspects of interactions between Romans and 'barbarians' in the north-western regions of Europe.

Northern Europe has become an interesting arena of academic debate around the topics of Roman imperialism and Roman-'barbarian' interactions, as these areas comprised Roman provincial territories, the northern frontier system of the Roman Empire (limes), the vorlimes (or buffer zone), and the distant barbaricum.

This area is, today, host to several modern European nations with very different historical and academic discourses on their Roman past, a factor in the recent tendency towards the fragmentation of approaches and the application of post-colonial theories that have favoured the advent of a varied range of theoretical alternatives.

Case studies presented here span across disciplines and territories, from American anthropological studies on transcultural discourse and provincial organization in Gaul, to historical approaches to the propagandistic use of the limes in the early 20th century German empire; from Danish research on warrior identities and Roman-Scandinavian relations, to innovative ideas on culture contact in Roman Ireland; and from new views on Romano-Germanic relations in Central European Barbaricum, to a British comparative exercise on frontier cultures.

The volume is framed by a brilliant theoretical introduction by Prof.

Richard Hingley and a comprehensive concluding discussion by Prof.