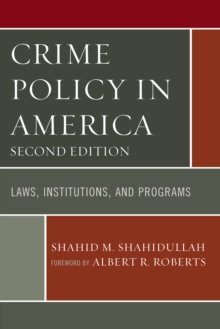 The second edition of Crime Policy in America describes the process of policy-making and the substantive nature of policy directions in crime and justice in America, particularly from the beginning of the 1970s.

The perspective of this book is deeply historical, sociological, and legalistic.

Historically, the book has explored the evolution of different policy strategies at different periods of American history; sociologically, it scrutinized the impact of the get-tough policy paradigm on crime and justice, and from a legal perspective it has examined the conflict and the consensus of Congress and the federal judiciary on different issues of crime and justice from drug crimes to sex crimes to counterterrorism.

The second edition of the book has particularly illuminated the changing directions of US crime policy from the dominance of the "get tough" approach in the 1980s and 1990s to a more balanced approach to crime control and prevention in the beginning of the 21sr century.