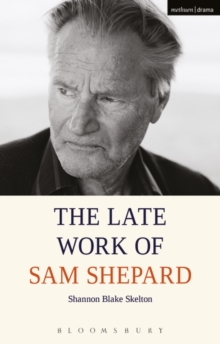 Hailed by critics during the 1980s as the decade's 'Great American Playwright', Sam Shepard continued to produce work in a wide array of media including short prose, films, plays, performances and screenplays until his death in 2017.

Like Samuel Beckett and Tennessee Williams in their autumnal years, Shepard relentlessly pressed the potentialities and possibilities of theatre.

This is the first volume to consider Shepard's later work and career in detail and ranges across his work produced since the late 1980s. Shepard's motion picture directorial debut Far North (1988) served as the beginning of a new cycle of work.

He returned to the stage with the politically engaged States of Shock (1991) which resembled neither his earlier plays nor his family cycle.

With both Far North and States of Shock, Shepard signaled a transition into a phase in which he would experiment in form, subject and media for the next two decades. Skelton's comprehensive study includes consideration of his work in films such as Hamlet (2000), Black Hawk Down (2001), The Assassination of Jesse James by the Coward Robert Ford (2007) and Brothers (2009); issues of authenticity in the film and screenplay Don't Come Knocking (2005) and the play Kicking a Dead Horse (2007); of memory and trauma in Simpatico, The Late Henry Moss and When the World was Green, and of masculine and conservative narratives in States of Shock and The God of Hell. Lauded by critics in his lifetime and since his death in July 2017 as 'one of the most important and influential writers of his generation' (NY Times), Shepard 'excelled as an actor, screenwriter, playwright and director' (Guardian); this is a timely and important assessment of his work spanning the last three decades of his life.