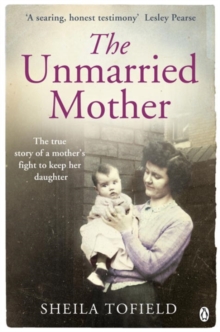 Sheila Tofield tells her moving true story about being a single mother in 1950s Britain, in The Unmarried Mother. 'A searing, honest testimony' Lesley PearseSheila grew up in Rotherham, the daughter of an uncaring mother who made her believe she was useless, stupid and - most painfully of all - unlovable.

As a young woman, her worst childhood fears were confirmed when her fiance broke off their engagement without an explanation.

Heartbroken and vulnerable, Sheila was easy prey to the worst type of man - a man who turned his back on her when she told him she was carrying his child. In Fifties Britain, an unmarried, pregnant girl received,not sympathy but censure and contempt.

Shunned by most of her family, Sheila ended up in a Church of England home for unmarried mothers, with no apparent alternative than to give up her child for adoption.

But when she held her newborn daughter in her arms for the first time, Sheila knew she had to do the unthinkable: bring up her baby on her own in a society that would condemn her for it. Sheila Tofield is a proud grandmother living in Chichester and The Unmarried Mother is her first book.

Her touching story was picked up by Penguin when she entered the hugely successful life story competition with Saga Magazine.